Yarn, yarn and more yarn. That seems to be my current creative life, but it hasn’t always been like that. Many of you will be unaware that stitching, art and dyeing were the main focus of my life until …

I ran a very successful business selling my own hand dyes. Threads, fabrics, even yarns, although at that time they were aimed at stitchers, not knitters or crocheters. I had such a good time travelling around the country selling, teaching and giving talks on a wide variety of textile and design techniques. Sadly it all came to an end abruptly due to family illness, but crochet became a helpful interlude. Then Reynauds became so bad I could no longer hold a needle without pain, and gradually stitching ceased. I miss it, though. I miss finding the inspiration and seeing it through to the end, either as a working sample or a finished piece.

Crochet became more of an interlude. It’s still mostly comfortable to hold the hook, and I just rest when it’s too bad. Here’s a quick glimpse of my current project, but I hope that you will all read on to discover the real purpose of this post.

Design was as much of my creative process as the completion of a project. I’ve kept in touch with various aspects of this but have been delighted to re-connect with people from a relatively long time ago. One of these is Lenna Andrews. I first found her again via Instagram, and I’ve been following her regularly. She has moved back into stitching in an interesting way, and as a result I am joining in with a project she announced at the end of last year, also on her blog. Today I’m sending her some small stitched pieces, and I thought you would like to see them before they go into the envelope.

The theme is own choice, and I’ve chosen for mine, the window of what I laughingly sometimes call my studio. 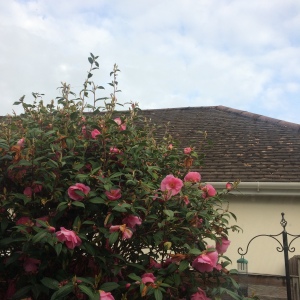 From this window I can see a large camellia, which is currently set once more for an abundance of flowers, and my main bird feeding station. I tried to catch a photo this morning to include some birds, but they were too skittish in front of the camera and wouldn’t hang around, so this picture from late March last year will have to do. From my vantage point I am amused daily by the army of Blue Tits, Coal Tits, Dunnocks, and various Sparrows that visit, usually in pairs. We even have a couple of Robins that only tolerate each other during really cold spells. The Long-tailed Tits just visit once a day, and Mrs Blackbird is remarkably blatant, while her male counterpart just lurks until he thinks I’m not looking. The view is further enhanced by the ever-changing sky, and the other plants out of shot on the right. My interpretations are just 15 minute stitchings.

I look forward to seeing more on Lenna’s blog etc as they arrive.

8 thoughts on “This just isn’t crochet!”