You may remember that I ran out of Parma Violet, well today I’ve managed to locate some – so I’ll soon be back on track. In the meantime I’ve pressed on with both the Spirit and Temperature blankets. 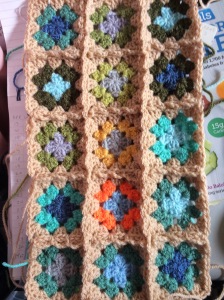 The first 15 days of April were certainly colourful! I didn’t expect that bright splash of Yellow, or Orange! I think they look rather good sitting amongst the blues and greens of the other days.

Rather than leave the Spirit of April alone gathering dust I moved on to other sequences. I’ve enjoyed watching the progression of colours, but this time I moved on to a very garish combination. You were warned about the sunglasses! 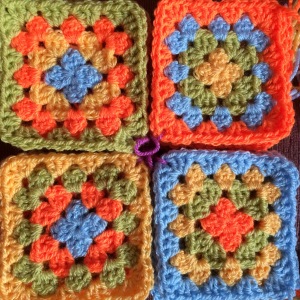 They are certainly bright! In fact they look even brighter when placed with some of the more subdued squares already completed… 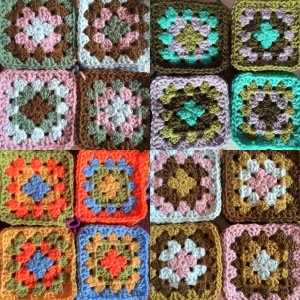 but they won’t look out of place when all the sequences are together.

Tonight I’ll continue with this,

although it won’t be finished until tomorrow. Then I’ll get back to the one that’s waiting in the wings. Hopefully that will be finished before the end of the week. I had another surprising colour in the temperature this week – so who knows where we will actually end up this month? I’m enjoying the ride and unpredictability.

That’s one thing about British weather – it’s never boring, even if it has that reputation 😉

I dye. Colour is my business and I using a variety of materials. I also enjoy enabling other creatives to enjoy their art. Crochet is one of my current means of expression. Some of my blogs are kept as daily records. Take a look and you will see. View more posts

One thought on “Do not read this post without sunglasses”