January has been an interesting month. Unlike last year it has been particularly gloomy for several days. The few that have been sunlit have been such a blessing. Today was such a day, although this evening is wet. Nights have been very dark. The moon isn’t rising until the early hours (this morning it rose after I was up for the day) so the sky is hardly lit. This has not been good for either choosing colours, or for photographs! All crochet has been done during the hours of darkness, so I’ve been waiting to take pictures, and finally here are a few…

This year I’m making the temperature blanket in a slightly different way. Last year’s was made in monthly blocks – and these were joined into the seasons. I used 4 linking colours, but this year I’m only using one – and there will be no seasonal breaks. One long strip of granny blocks is a little boring, so instead, here is a block of nine days (a photo collage)

The colours are as cool as the weather and edged with Parchment. I think it goes very well with the blues and lilacs.

I’m using the same colour to edge the blocks for the Spirit of January. You may remember that I’m comparing the days of last year with those of this – so each square has 4 rounds of colour. Here is a photo collage of nine days. 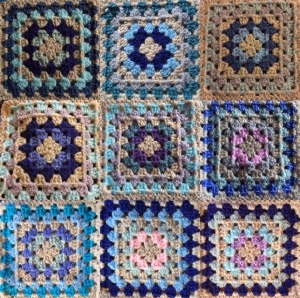 You can see that so far last year was far more colourful than this year, and in the above no days were the same. However…. 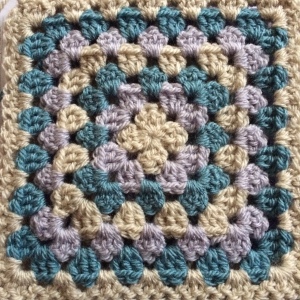 that changed at the weekend. You can see that the days were identical as far as temperature was concerned.

How is your blanket coming along? Are you making a Temperature Blanket? They are fun – and worth the long effort of making a square a day.

One thought on “Temperature update”